A Little Background Information on the Shofar 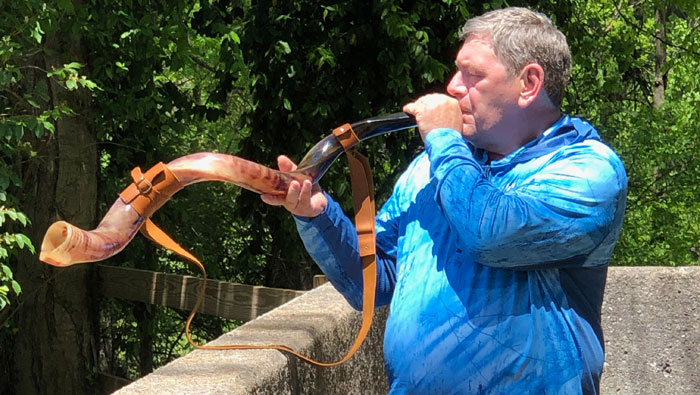 The “trumpet” is mentioned directly over seventy times in the Bible, depending upon the translation. In the Old Testament Hebrew, it is “Shofar”. In the New Testament Greek, it is “Sapir”. For all intents and purposes, in this series of discussions, I will refer to the trumpets as “Shofar” collectively, “Rams Horn” for the Rams Horn, and “Yemenite” for the large, spiraled Kudu horn.

However, before we get into the actual trumpets themselves, let’s talk a little bit about why we have biblical trumpets and their significance.

The first mentioning of a horn of any kind is in Genesis 22:13.

“Then Abraham raised his eyes and looked,

And behold, behind him was a ram caught

In a thicket by his horns; And Abraham went

And took the ram and offered him up for

A burnt offering in the place of his son.”

The Rams Horn is symbolic, in Jewish tradition, of God’s provision. Here, in Genesis 22:13, we see the root of that tradition in that God provided a sacrifice, a ram caught by its horns in a thicket, for Abraham to present to God after Abraham exhibited his intent to obey God in the sacrifice of his son, Isaac. Remember that, it is a symbol of provision.

The next time we hear of a Rams Horn is in Exodus 19:13 at Mount Sinai as the LORD God is giving instructions to Moses in how Moses is to present the people before God.

“….When the ram’s horn sounds a long blast, they shall come to the mountain.”

Remember, the Rams Horn even at this time, in Moses’ time, was symbolic of provision. So, it would seem that the sounding of the Ram’s Horn would be interpreted as something was “forthcoming”. But, before I get into that, I feel that it is necessary or, perhaps, more beneficial to go back further and give some additional background. 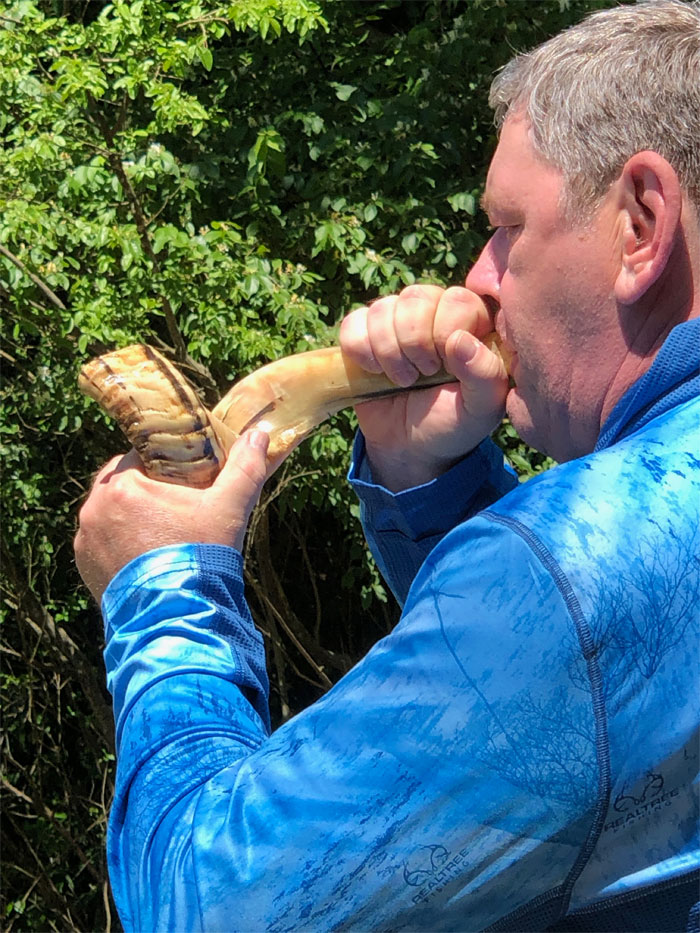 “Then God said, “Let US make man in OUR image,
according to OUR likeness; and let THEM rule
over the fish of the sea and over the birds of the sky
and over the cattle and over all the earth,
and over every creeping thing that creeps upon the earth.

However, if you will notice, something has changed. God did not speak man into existence as He did everything else. No. If we read a little further in Genesis 2:7 we find something even more miraculous happened.

“Then the LORD God formed man of the dust from the ground, and breathed into his nostrils the breath of life; and man became a living being.”

Now the Bible does not tell us how God (US) formed man in His (OUR) image and according to His (OUR) likeness. The language would seem to indicate that all parties had a hand in the formation of man. And, I noticed that God breathed into the nostrils of man the breath of life. Why would God do that? Why would God go through the trouble of forming man when all he had to do was speak man into existence as He had everything else? Why would God breathe HIS breath into the nostrils of a lifeless being, imparting life, when He could have merely said, “Awaken! Get up!”?

That simply would not do! God formed man, indicating at least some part of His hand was in play during the process, and breathed HIS breath into the man to give the man life. Remember when I said that God’s voice was powerful and creative? Well, His breath is life giving and intimate. God desired a greater intimacy with this portion of His creation known as man. His breath is in us! That what life, in mankind, is. Life is God’s breath!

Now, let’s look at what we’ve learned and how we may understand what we’ve learned and apply it in our lives. God made man in His image and according to His likeness. Does God have a voice? Yes. We learned that God spoke and whatever He spoke came into being out of nothing. God’s voice is powerful and creative. God gave us a voice. We know that God has breath because we learned that God breathed into man and man became a living being. God’s breath is life giving and intimate. God’s breath is in our lungs. We have breath and we have a voice.

So, I wonder. Why would God would choose a wind instrument, a Rams Horn (a symbol of PROVISION), in Exodus 19:13 to call Moses and the people to Mount Sinai? Could it be that a wind instrument, driven by the breath of God would be used in a similar fashion as the voice of God to call His people forth to the mountain? Let’s investigate that. Shall we?

16. So it came about on the third day, when it was morning,
that there were thunder and lightning flashes and a thick
cloud upon the mountain and a very loud trumpet sound, so that
All the people who were in the camp trembled.”
17. And Moses brought the people out of the camp
and they stood at the foot of the mountain.
18. Now Mount Sinai was all in smoke because the LORD
Descended upon it in fire; and its smoke ascended like
The smoke of a furnace, and the whole mountain quaked
violently.
19. When the sound of the trumpet grew louder and louder, Moses
Spoke and God answered him with thunder (a thunderous voice). 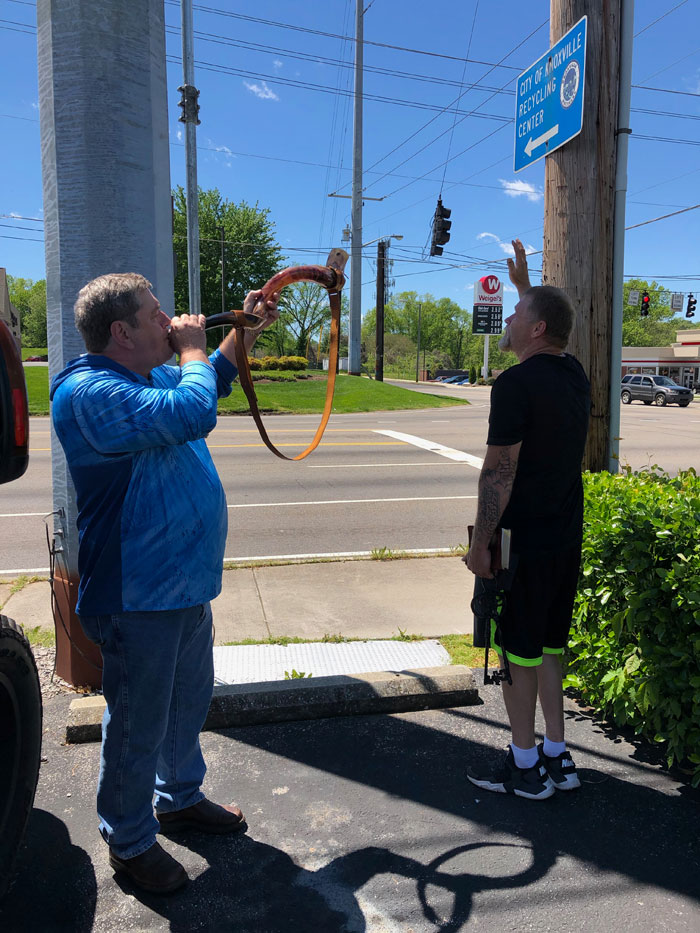 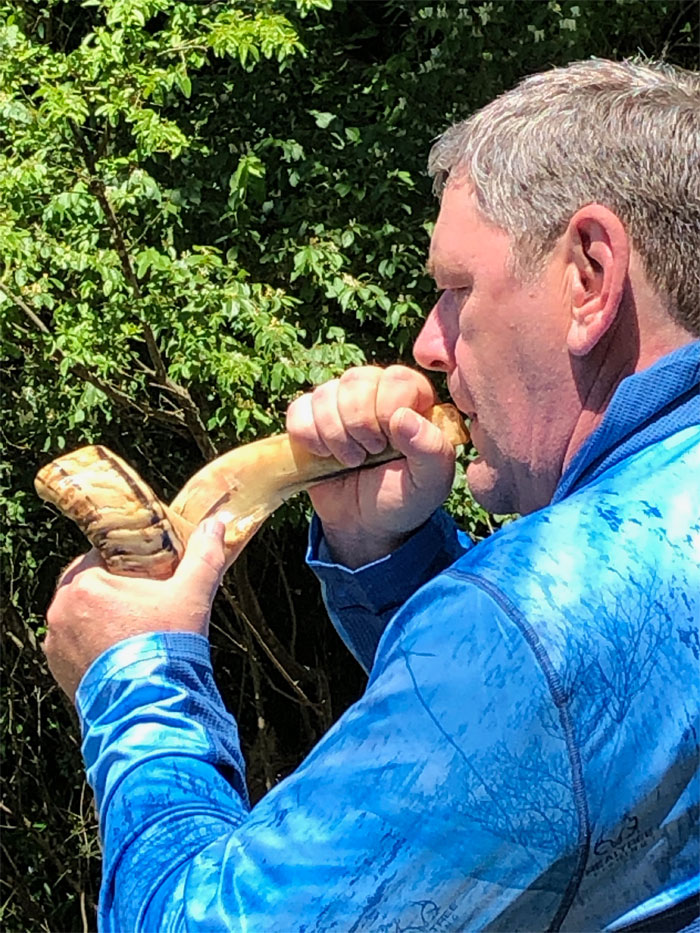 Now, if you will notice the sound of the trumpet was very loud and it sounded louder and longer as time went by. Man cannot do that. As a man sounds a shofar, his lungs only hold so much air. Therefore, the longer that a man sounds the shofar, the volume decreases as the air in the lungs is expended. The biblical text clearly illustrates that the sound waxed louder and longer. Conclusively, it must be understood that the sound of this Rams Horn had to have been issued forth by a supernatural being. That supernatural being, of course was God. It would seem that God has put His lips to the Rams Horn and sounded the trumpet Himself. God does sound the Rams Horn. In Zechariah 9:14 it is stated that the LORD will blow the trumpet. So, I see that it is a possibility that God, personally, sounded a Rams Horn Shofar, here in Exodus 19, using a symbol of provision, to call His people that He would hand down the Law or a Provision of Law to His people.

There is, however, another possibility.

“I was in the Spirit on the Lord’s day, and I heard behind me a loud voice like the sound of a trumpet.”

Who was speaking to John in a loud voice like the sound of a trumpet? Well, that would have been God speaking.

“After these things I looked, and behold, a door standing open in heaven, and the first voice which I had heard, like the sound trumpet speaking with me, said, ‘Come up here, and I will show you what must take place after these things.’”

Now, who was speaking to John in this instance? Well, that would have been God as well.

In my mind, it has been established that God’s voice is creative and powerful. God’s breath is life giving and intimate. God’s breath is in my lungs. God provided the Ram for Abraham to sacrifice in place of his son Isaac. The Ram was caught in a thicket by its horns. The Rams Horn is a symbol of  God’s provision. We know that God does and will blow a shofar per Zechariah Chapter 9 and we know that He may have sounded the Rams Horn in Exodus 19 when He provided the LAW for His people. We do know that God was the origin of the sound because the sound grew louder and sounded longer than man was capable of. In light of Revelation 1:10 and 4:1 we can also say that the sound of the shofar is that which is LIKE the voice of God.

Wait a minute! Did I just write that? Yep, I did. The sound of the shofar is that which is like the voice of God!

However, I will say that when the man is obedient to Scripture or is directed by Holy Spirit to sound the Shofar, that God’s breath in the man’s lungs will emanate from deep within him, through the horn and send forth that which is like the voice of God! Then, in compliance and obedience, and only then, should  supernatural manifestations be expected. Expect them! They will come! But only in obedience to the Holy Scriptures and the direction of Holy Spirit.

God’s voice is powerful and creative!

The sound of the Shofar is that which is like the Voice of God!