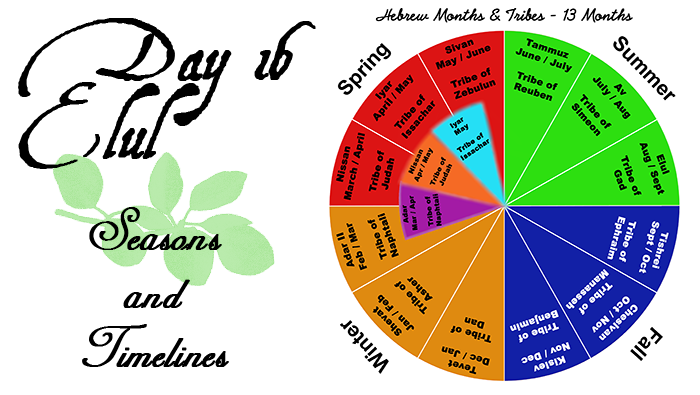 Whether anyone believes it or not, the shofar is sort of like a timepiece that marks and records events on God’s timeline. What is God’s timeline?

“Now the LORD said to Moses and Aaron in the land of Egypt, “This month shall be the beginning of months for you; it is  to be the first month of the year to you.” Exodus 12:1-2 (NASB95) 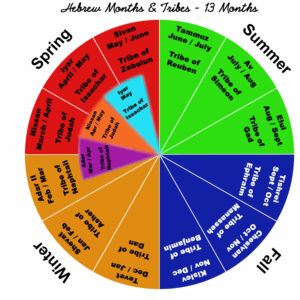 Here is where God establishes His Ecclesiastical Calendar. Just so you know, at that time the first month was called the month of Abib (Aveev). Prior to the destruction of Solomon’s Temple when Babylonia took Judah into captivity, there were only four months called by name in the Old Testament.

Ethanim, the seventh month, is mentioned name only once in 1st Kings 8:12.

Bul, the eighth month, is mentioned by name only once in 1st Kings 8:38.

All other mentionings of dates are recorded as a certain day in a certain number of month. Sometimes, a certain year of a king’s reign is also mentioned.

Each month ends and a new month begins with the new moon. At each new moon the biblical trumpet sounds. Remember? That’s an ordinance. The trumpet ushers out the old and brings in the new. It signals the end of one thing and the beginning of another. The sound of the trumpet marks and records those events on God’s timeline.

Why did the names of the months change? Judah was in exile in Babylon. They did not have the Torah or the Prophet’s writings. All they had to rely on was memory and oral conveyance. A generation died and another generation was born during exile. It was only natural that they would pick up and use the Babylonian language to some extent.

Okay, what other events on God’s timeline do the trumpets mark and record?

The Feasts were established for Israel. We were grafted into Israel or so the Book of Romans tells us. Yet we are not required for the sake of legality to be Jewish or hold strict adherence to Jewish practices. However, Paul tells us in Romans not to be arrogant because we, as wild olive branches, do not support the root but rather the Root supports us. That would be Jesus Christ, Yeshua Ha-Mashiach. But let’s see what God said.

“Speak to the sons of Israel and say to them, ‘The LORD’s appointed times which you shall Proclaim as holy  convocations – My appointed times are these:’” Leviticus 23:2 (NASB95)

Why is a “holy convocation” no longer “holy” simply because it was spoken to the sons of Israel? Following the above verse is a description of the Feasts, God’s appointed times.

Now you can call that “Law” if you want to. Bug is it Law of the Torah in that it is included in the 613 laws? The Bible says that the Feasts are statutes. But the Feasts are ALSO ordinances. No where have I read where God retracted His words from Scripture or said, “Oops, maybe I shouldn’t have said that in that manner. The gentiles aren’t going to like that.”

Again, I’m not saying that you or I have to observe those Feasts in strictest Jewish fashion. I am saying that I believe God expects us to remember these times and give Him honor, praise, worship, and our giving or sharing. Why? Because the Feasts, if you will look closely to the time frames in the Bible, these Feasts are centered around harvest seasons in God’s holy land. Why is that important? 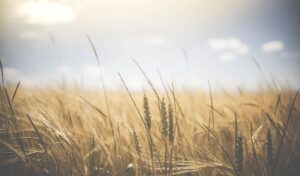 Ever heard “the harvest is great, but the workers are few”? I’m paraphrasing that, of course but the fact remains that there is a great harvest awaiting. Ever wonder why the Feasts are centered around the harvests? Of course you haven’t because you’re still believing that the Feasts are “Jewish holidays”.

Consider the Feast of Weeks. That falls on Pentecost when the Spirit of God was poured out on all flesh. The Bible tells us the Church didn’t just blossom but exploded with 3000 accepting Christ in one day! I’d say that’s a respectable harvest. The Feasts are all about harvests! They are a time of either remembrance or looking forward to a promise!

Let me further illustrate that. In Exodus 12 we see the Feast of Unleavened Bread established, and The LORD’S Passover. Now go back to Exodus 6 and let’s look at some promises that were made in accordance the that Feast.

The Jewish practice each Passover is to drink the “4 cups of promise” as found in these two verses. What promises? Let’s look at them.

“I will bring you out from under the burdens of the Egyptians…” is a matter of sanctification. God “brought them out” or He set them apart.

“I will deliver you from their bondage…” is a matter of deliverance. God delivered them from Egypt.

“I will redeem you with an outstretched arm and with great judgments…” is a matter of redemption.

“I will take you for my people and I will be your God…” is a matter of being a source of joy.

Now what did Jesus do for us?

He sanctified us. He set us apart. He delivered us and saved us. He redeemed us with His blood and He will judge. He is the source of our joy or, He should be.

But there is one thing that I’ve not heard the Jews mention and that’s Exodus 6:8.

“I will bring you to the land which I swore to give to Abraham, Issac, and Jacob, and I will give it to you for a possession; I  am the LORD”  Exodus 6:8 (NASB)

You see the fifth promise was to bring Israel into a land and give it to them as a possession, an inheritance from the promises that God had made to Abraham, Isaac, and Jacob. God DID that! He did that AGAIN after Israel was scattered in 70 A.D. when Rome destroyed Jerusalem! In 1948 Israel became a nation again. In 1967, Jerusalem was captured from Jordan. The Jews were back in the land, fulfilling thousands of years of prophecy!

What has Jesus done for us? Through Him we have an inheritance not in a piece of land but in His Kingdom! Pretty neat huh?

So don’t tell me that the Feasts are merely “Jewish holidays” because I’m convinced that they are not! I’ll sound the trumpet at the New moon, the Full moon, AND the Feasts because I remember what God has done for Israel and, whether you believe it or not, I am convinced that He has done as much for me and more!

It is a means of understanding what God’s seasons are and how He works in His seasons. Instead of pleading with God to align Himself with us and what we want, how about we align ourselves with God and what He wants? It’s time to awaken!

“40 Days of Awakening” will continue tomorrow.