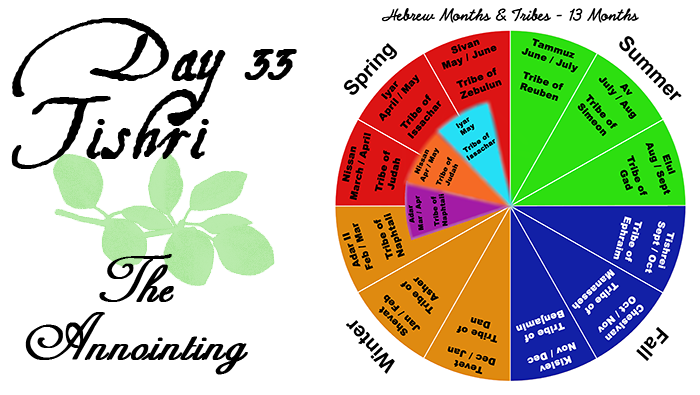 Early in my journey after the “Awakening” on September 9, 2018, when I heard the Ram’s Horns shofar for the first time, I was led to a web site owned by a man in Illinois who had been an evangelist and imported Shofarot (Remember? Shofarot is plueral for Shofar) from Israel. He not only sold shofarot but had trained people from all over the world to sound the shofar and taught them about the biblical trumpets. His name is Jim Barbarossa.

As I scrolled through his offerings, I was amazed at how expensive his offerings were. There was no way that I could afford ANY of his offerings! Cheryl opted to buy a 24” Yemenite from Amazon. The thing was a horn of a Kudu alright and that’s about all that I could say about it other than it was a piece of junk that was impossible to sound. It was a decorative ornament for the longest time. Something to be dusted.

But I didn’t give up. I studied. I prayed. I meditated on the Scriptures! In December of 2018 I called Jim to talk about his shofar offerings. As I’ve mentioned, they were a bit pricey, and I told him so. I told him that there was no way I could afford such an exorbitant amount. I just didn’t have the money.

I’ll never forget. Jim said, “No, Lonnie, you don’t have the money, yet! If God intends for you to sound the shofar, the money will come.” With that said, he hung up on me. The nerve of that guy!

As I conveyed in my testimony earlier in these 40 days of Awakening, Cheryl told me to find a shofar when our tax returns came in during February 2019. I called Jim again. He just laughed and said, “I told you the money would come.” What he didn’t know is that we desperately needed that money to pay bills with, but my stubborn Swedish wife would not be deterred. 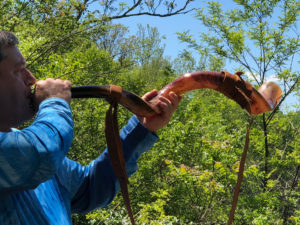 He sent a 43” Yemenite and a 21” Ram’s Horn, a packaged deal along with a couple of books and some teaching on a set of DVD’s. Those two little booklets and those DVD’s served as the foundation for my understanding of the biblical trumpets. However, those materials were not anywhere near all inclusive. I had a lot more to learn on my own. In one conversation with Jim, he said, “Study the materials. If and when you feel confident, give me a call and I’ll impart a blessing of anointing.”

I understood what he was saying. One cannot impart something to another that they themselves do not have. He had preached, sounded the shofar, and taught all over the world.

I rocked along about seven months and Cheryl asked me if I’d called Jim back like he had asked me too. I admitted that I hadn’t.

“Well,” if you want the anointing to walk this thing out, I suspect that you need to call him like he asked you to.” So, I picked up the phone and called.

Something welled up deep inside me and before I knew it, I shouted, “NO!” into the telephone.

“I’m not doing this on the phone.” I said. “If I’m going to do this, I want a hands on, double portion. I don’t want just a little bit of anointing; I want it ALL!”

It was almost as if I could hear Jim thinking on the other end of the line. “Can I reach you at this number?” He asked.

“Yep, that’s my number.” I confirmed.

“I’ll call you back tomorrow.” With that said he hung up.

The next day I received a text. “Can you come to Portage, Indiana on Sunday October 20th?”

I replied that I could. Arrangements were made for Cheryl and I to meet Jim and his wife in Portage on the nineteenth for dinner. We had a great time. Jim told us that he would meet us the next day and that we would follow him to church for the event. 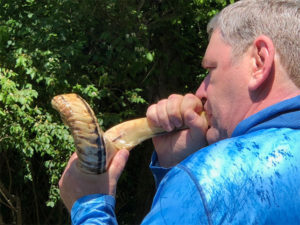 Imagine our confusion the next day when we followed Jim and his wife into the inner city of Gary, Indiana. That’s right, Scary Indiana. Murder city USA! We didn’t go into any large church or medium sized church. We went to a small church who met in an old church building that had been built at the turn of the twentieth century. It was a small congregation of the sweetest people I’ve ever met, and they took us in like we had been family. Oh, and I forgot to mention that this little congregation was black with the exception of Jim and his wife along with Cheryl and myself. I guess it proves that color is not that big a deal when God’s business is at hand.

When the time came, Jim called Cheryl and me to the front and told us to raise our hands and receive what Holy Spirit had for us. Those were the last words I remember hearing. I’d seen people “slain in the Spirit” before. Well, I was an old Baptist boy, and I didn’t know so much about such things. I do recall the sensation of a mighty, rushing wind. I seem to remember taking a step back to brace against the wind. All I remember afterwards was the sensation of a warm ocean wave crashing over me and swirling about me.

The next recollection I have is looking up at the cracked plaster ceiling and hearing Jim blowing the shofar over me as the little congregation shouted great shouts. After a kind young man helped me to my feet, Jim stepped up and tapped me on my chest.

“I’ve prayed for blessings of anointing over hundreds before.” Jim said. “They’ve come from all over the world. Denmark, England, South Africa, Indonesia. But you,” he said tapping me on my chest again, you are the first one that would come to my church. All the rest would only come to my house. That’s significant in some way. I don’t know what the significance of you being the first to come here, but I feel in my spirit that it is significant.” 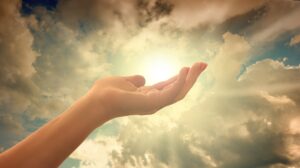 Shortly thereafter, Cheryl and I said goodbye to our new friends and family and began our journey back to Tennessee. On the way home I realized that day was the final day of Sukkot or the Feast of Tabernacles. It was the eve of Shimini Atzeret, the eighth day of gathering as Solomon had dedicated the altar of the first Temple. It was reminiscent of the fact that we are wandering this earth as Israel had wandered in the desert. They were looking for the promise of a land. I am looking for the promise of an inheritance of the kingdom! It was the eve of Shimini Atzeret, a new beginning!

I shared these thoughts with Cheryl as she sat quietly in the passenger seat, smiling.

“For us!” I corrected her. For the longest time we drove in silence as I watched the waning moon glowing over the corn fields of Indiana.

That’s the story of my own personal anointing. I’m not going to smear my anointing on you. But, it’s nothing to be afraid of.

I am The Old Watchman, Ezekiel. Now you know.