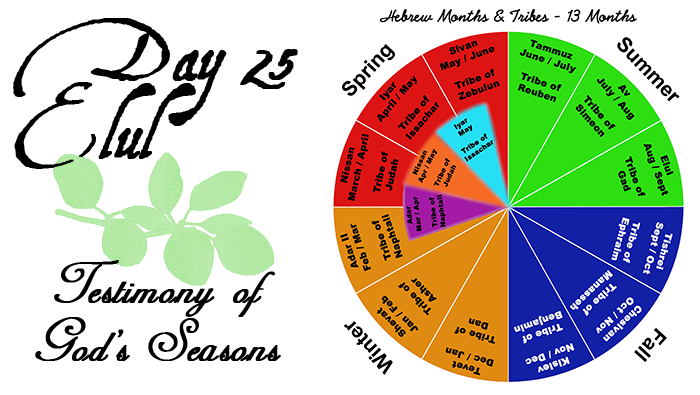 We’re getting close to the seventh month of Tishri, the month of what is referred to as the “High Holy Days”. There’s a reason that they are called that. It has to do with God’s time, the season that we are in, and how God works in His time and in His seasons. I’ll get more in depth into that within the next several days. Right now, I’d like to share a testimony about my experience during a time and seasons that I recognized in the Holy Scriptures and how God worked a miracle for me during that time.

First, I’d like to pre-empt this by saying that I am neither for nor am I against anyone taking a vaccine. You all have an idea as to what vaccine I speak of. I do not condemn anyone who has taken a vaccine. That is a choice that each of us should make freely of our own volition. My father and four uncles served this country to make certain that we have that freedom to choose. I stand resolute in my belief that each person has the right to make their own choice whether or not to take a vaccine. I stood resolute to decline taking the vaccine. 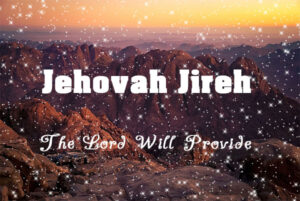 However, a mandate was handed down that all health care workers were to take the vaccine or the government would cease any federal funding to facilities whose employees refused to comply. That means that I would be out of a job and a twenty-seven-year career in the health care field would come to an end.

Cheryl and I prayed about taking the vaccine or not. We could not come to peace with it. That is not to say that anyone was wrong for taking the vaccine. We could only determine that it was not for us. The mandate that I received as I prayed was, “Stand firm! Know that I am God. See the recompense of the wicked.”

I refused to take the vaccine and I was given a deadline of December 5, 2021, to comply. A lot of people were quitting their jobs. Nurses, nursing assistants, housekeeping, and dietary personnel were leaving their jobs and moving on. I asked God if I was supposed to quit and look for another job. All I would get back was that small, still voice, “Stand firm! Know that I am God. See the recompense of the wicked.”

On November 28, 2021, it was on a Sunday morning, I was reading my Bible before going to church. As I read, I prayed, “Lord, am I lose everything that You’ve given me? If that’s Your plan, then so be it. I’m ready to lose. I’d like to believe that if I lose that it’s because You have something better for me.

I began flipping pages in my Bible and landed in the second chapter of Haggai. Haggai 2:18-19 to be precise.

“Do consider from this day onward, from the twenty-fourth day of the ninth month; from the day when the temple of  the LORD was founded, consider; Is the seed still in the barn? Even including the vine, the fig tree, the pomegranate and the olive tree, it has not borne fruit. Yet from this day on I will bless you.”  Haggai 2:18-19 (NASB96 emphasis is my own) 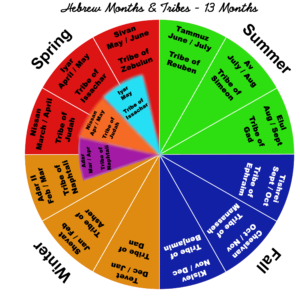 I closed my Bible and thought for a moment. The day was November 28, 2021. However, the day on God’s Ecclesiastical Calendar was the twenty-fourth day of the ninth month, the month of Kislev. “From this day forward I will bless you.” The words rang in my mind as I contemplated that I was in the same season that Haggai was describing. I opened my Bible back up and read a little more of Haggai 2.

“As for the promise which I made you when you came out of Egypt, My Spirit is abiding in your midst; do not fear!” For thus says the LORD of hosts, ‘Once more in a little while, I am going to shake the heavens and the earth, the sea and the dry land. I will shake all the nations; and they will come with all the wealth of all nations, and I will fill this house with glory,’” Says the LORD of hosts.  Haggai 2:5-7 (NASB95 emphasis is my own)

I closed my Bible with tears streaming down my face. Cheryl walked in and wanted to know what was wrong.

“Nothing,” I replied as I wiped away the tears. “God just gave us a promise from Haggai.” Then, I showed her the texts.

“Sounds good to me!” She responded. “I’m with you.” That was November 28, 2021, the twenty-fourth day of the ninth month. Two days later a federal judge blocked the mandate, and I was given a reprieve.

However, the Supreme Court overruled the federal judge’s blockade and re-instituted the mandate. I was given a new deadline of January 25, 2022 to comply. Again, I refused. My mandate still stood. “Stand firm! Know that I am God. See the recompense of the wicked.”

On January 20, 2022, I was offered a “religious exemption” form from my employers. They made no promises. I had problems with the offer. If they could grant permission for me to not take a vaccine, then they could withdraw that permission at any time. But I filled the form out, listing my objections, and turned it in. What I actually did was write a two-page sermon.

On January 23, again on a Sunday, I was reading and praying about the situation. I knew that God had acted on my behalf once. I knew that Cheryl was working on a contract basis for a firm, and that her contract would be finished within a couple of months. I was led to Zechariah 1, the next page over from Haggai chapter 2.

Zechariah laid out a word from God that came on the twenty-fourth da of the eleventh month, the month of Shebat! Here is what I read:

“Again, proclaim, saying, ‘Thus says the LORD of hosts, My cities will again overflow with prosperity, and the LORD will again comfort Zion and again choose Jerusalem.”  Zechariah 1:17 (NASB95)

As I continued reading, Zechariah saw four horns that had scattered Judah, Israel, and Jerusalem. I read about four craftsmen who were sent to terrify and throw down the four horns that had scattered the people of the land. I thought about all the people that I knew that had quit their jobs and were now struggling. God hadn’t given me permission to quit, and I hadn’t quit. Yet, here I was again about to lose a job, a career, health insurance, life insurance, vacation pay, and possibly any retirement funds. “Stand firm. KNOW that I am God. See the recompense of the wicked.”

Want to know something that was funny? It was so funny I almost fell out of my chair laughing! The deadline, January 25, 2022, was the eve of the twenty-fourth day of the eleventh month!

I closed my Bible again. I had the promise. I didn’t know what God was going to do but I believed that He was about to do something. Would I keep my job? My career? Or did He have something else in mind for me.

We fixed dinner and ate dinner with the family. When Cheryl and I came back downstairs, I had a voice mail from the work place telling me that I still had a job if I wanted it and how appreciative they would be if I’d come to work! 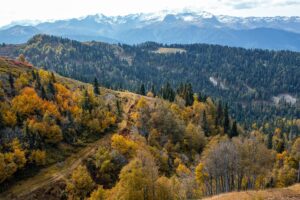 Now what can we take away from all this? I saw the times and seasons in God’s Word and how He worked in those times and His seasons. I found myself facing dire circumstances within those times and seasons. I chose to believe God Word as to how He works in His time and seasons and align myself with His Word instead of begging Him to align Himself with me. I have to say that it worked out pretty well. Again, I’m not saying that it is wrong for anyone to take the vaccine. I’m saying that it was wrong for me. “Stand firm! Know that I am God. See the recompense of the wicked.” That was my mandate and I honored it.

What’s more, when we understand this season that we are currently in during this month of Elul going into the “High Holy Days” of the month of Tishri, we better understand how God has positioned Himself to bless His children if they will but repent. I remember what God did for Israel in the ancient days and I travel the ancient path that He laid out for them. But they said, “We will not walk in it.” I sound the trumpet to call them back to the path and they said, “We will not listen.”

I am The Old Watchman, Ezekiel. Are YOU LISTENING NOW!