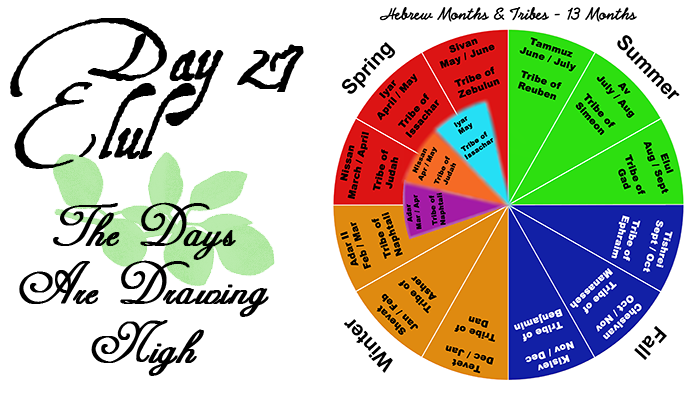 The Days Are Drawing Nigh

The days are drawing near. What days? The High Holy Days! The ten days of Awe!

We are two days away from the eve of Day 29 of Elul. Elul will come to an end with the sounding of the trumpet and the Month of Tishri will begin. 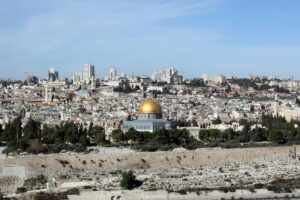 The Jewish Civil Calendar was established in the twelfth century by a man called Maimonides. Maimonides was a Separdic Jewish Philosopher also known as “Rambam”. He was a brilliant man. Supposedly, Maimonides used current mathematical formulae of the day and lineages in the Bible to calculate the history of the Bible and arrive at the date of creation. Thus, this coming year on the Jewish Civil Calendar is 5783. Originally, the months were kept by priests observing the moon phases. These times were “telegraphed” throughout Israel by lighting fires on the mountaintops as a signal that the end of one month had come and another month began. The Samaritans constantly attempted to interrupt this means of keeping time on the calendar by lighting their own fires to cause confusion.

The mathematical formulae that Maimonides used was established by another philosopher Hillel II in the third century. So, it can be said that the Jewish Civil Calendar is a calendar established by man that coincides with God’s Ecclesiastical Calendar that was established in Exodus 12. That is, if everyone’s calculations were correct.

However, it is not my intent to explain the intricacies of the Ecclesiastical Calendar or the Jewish Civil Calendar. It can be rather complex. My intent is to inform you that there are two different calendars that coincide with dates and time although a particular date may be called one name on the Ecclesiastical Calendar and another name on the Jewish Civil Calendar. It is my intent to shed light on the origins and usages of the two calendars without being overly complex and causing confusion. Clear as mud? Good, let’s move along.

Yom Teruah, the first day of the seventh month, is noted in Numbers 29:1.

Numbers 29:1 (NASB95 emphasis is my own)  “‘Now in the seventh month, on the first day of the month, you shall also have a holy convocation; you shall do no laborious work. It will be to you a day for blowing trumpets.”

In the Hebrew, that “day for blowing trumpets” is “Yom Teruah”. It means literally “Day of the Great Shout”. Why is it the day for the great shout? In Jewish tradition, the Feast of Trumpets is a memorial of when God called Moses and the sons of Israel to Mt. Sanai in the Sanai wilderness. God called to Moses and the people with a voice of a Ram’s Horn Shofar. Moses spoke to God and God answered with thunder. 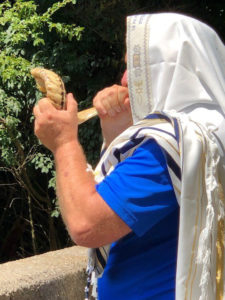 Add to this and consider that a great shout was followed by the trumpet blasts at Jericho. A great shout preceded the trumpets sounding as Gideon and his three hundred surrounded the camps of Midian. Often times, the sounding of the trumpet is connected to a great shout. For orthodox Jews, the Feast of Trumpets has been fulfilled. Followers of Christ should understand that the seven angels who sound seven trumpets in Revelation are a picture of how time will come to an end. Seven angels. Seven trumpets. A loud voice from heaven saying, “The kingdom of the earth is now the kingdom of the Lord and His Anointed one and they shall reign forever and ever.” Feast of Trumpets lasts seven days. Are you beginning to get the picture?

The Feast of Trumpets is a reminder of when God released a new nation called Israel. A new nation needed laws for order. That order was handed down at Sanai. However, the Feast of Trumpets is a reminder of a promise that Christ will return and establish His kingdom, a kingdom that believers will have an inheritance in. Israel wondered about for forty years in disobedience before they were allowed into a land promised to them. How long will we wander this earth before the promise of an inheritance in a kingdom comes to fruition?

The Feast of Tabernacles is a reminder of when Israel wandered the desert for forty years. Presently, during the Feast of Tabernacles, I tent out in the backyard for the week. The Feast of Tabernacles is called “Sukkot” (Soo coat). Israel resided in booths or tents, movable structures for those forty years they wandered in the desert awaiting the promise of a land as an inheritance. I reside in a tent. I wander this earth awaiting the promise of a kingdom! It’s ALL about remembering what God has done and remembering the promises God has made! It’s ALL about history repeating because history IS repeating and WILL repeat. Just as Israel was looking toward a land that was promised, I am looking for a kingdom that is promised!

Here’s the thing. We will not be called to Mt. Sanai. We’ll be called to Mt. Zion! The days of “Yom Teruah”, the Feast of Trumpets, through “Yom Kippur” are the ten days of Awe. In those ten days I am in Awe of how God has set up His time in this season and how His seasons are cyclic and repeating. I am in Awe as to how God has arranged time since before the beginning and the establishment of Israel as a nation for these events to play out. It is beautiful!

I am certain that there are questions as well as some ridicule coming. I’m prepared. I’ll explain things in greater detail as I go along. I am The Old Watchman, Ezekiel. Repent! The kingdom of God is at hand!