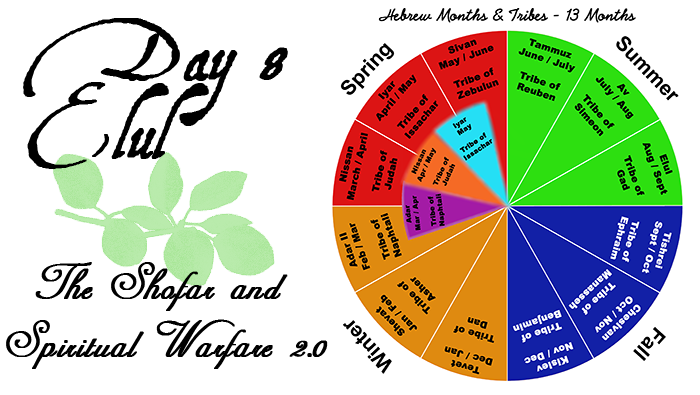 The Shofar and Spiritual Warfare 2.0

Today I’m going to continue the the line of thought in spiritual warfare, but I’m going to add some elements of fear, doubt, and faith into the equation. Why? Because the shofar is directly linked to spiritual warfare, fear, doubt, and faith. It’s in the Bible. We have to look no further than the Book of Judges for a beautiful picture of spiritual warfare that spilled over into the physical realm, the fear and doubt of a man and how his faith was increased. Add all that together with obedience and we see God move in massive, …uh… miraculous ways!

Gideon built an altar and called it YHWH SHALOM or God of Peace. The LORD told Gideon.to tear down the altar of Baal and the Asherah that stood beside it. Gideon went by night and tore down the altar and the Asherah. He sacrificed the two bulls using the wood from the Asherah. Now take notice of the second bull sacrificed and burned on the altar. The Hebrew word for that bull, that sacrifice, is the word formed with “Pe-Resh” as I described when I told you about the meaning of the Hebrew word “shofar”. 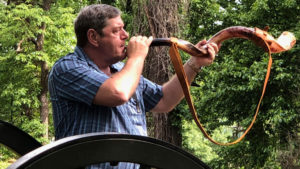 But let’s move along. Judges 6:34 tells us that the Spirit of the LORD came upon Gideon, and he sounded a trumpet and sent messengers throughout the land that the Abiezrites inhabited to summons an army. While the army was being assembled, Gideon was still doubtful and fearful. So, he did the song and dance with God with the whole dew and fleece thing. Still, Gideon remained doubtful. He remained doubtful even when 32,000 men showed up. Remember, the army of Midian was 150,000+ men.

However, God would not allow 32,000 men to march into battle. They were too many. May I remind you again, that the Midianite army was more than 150,000 men. But God said, “No.”. 22,000 men left leaving 10,000 men behind to fight. God said, “That’s too many. We must have a smaller army.” How much sense does that make? It makes no sense but that is God’s plan. No one could claim glory. Only God gets the glory. As it turns out God presents Gideon with an army of 300 men to march against 150,000 + battle hardened warriors of the Midianite army.

Gideon was shaking in his sandals. As they camped above the Midianite encampment, God told Gideon to attack the camp, but if Gideon was still afraid, he could go down near the camp and listen to what was being said. What he would hear would strengthen his hands. Gideon did go down near the camp and heard of a man’s dream where Midian was given into Israel’s hand. Now, here is where things get really interesting.

“When Gideon heard the account of the dream and its interpretation, he bowed in worship. He returned to  the camp of Israel and said, “Arise, for the LORD has given the camp of Midian into your hands.”  Judges 7:15 (NASB95)

“When the three companies blew the trumpets and broke the pitchers, they held the torches in their left hands and the  trumpets in their right hands for blowing and cried, “A sword for the LORD and for Gideon.” Each stood in his place  around the camp; and all the army ran, crying out as they fled. When they blew 300 trumpets the LORD set the sword of  one against another even throughout the whole army, and the army fled as far as Beth-shittah toward Zererah as far as  the edge of Abel-meholah by Tabbath.” Judges 7:20-22 (NASB95)

Now there is a whole lot of information in those three verses. We see the specifics in which hand the torch was to be held in and which hand the trumpet was to be held in. We see the battle cry, “A sword for the LORD and for Gideon!” But then we see the supernatural in spiritual warfare begin to happen. Pay attention because it is important that we see what happened and how it happened.

Unlike Joshua at Jericho, the shout, the battle cry, came first before the trumpets sound. But then it says, “Each stood in his place and the army ran, crying out as they fled.” Never once did it say that Gideon and his 300 men advanced. Yet, an army outnumbering them 500 to 1 began to cry and run away? And THEN, when 300 trumpets sounded, God “set the sword of one against another”. The Midianite army, well trained and battle hardened where slaughtering themselves and the rest fled the massacre to keep from being slaughtered by their own.

What happened? It seems obvious to me to that mass confusion and total chaos ensued within the Midianite camp. How could that happen? These were experienced men of battle. It is a matter of spiritual warfare spilling over into the natural realm. The shofars (Shofarot, the pleural of shofar is shofarot) sounded and mass confusion, so great, overwhelmed the enemy that they slaughtered themselves.

Why? Because the enemy is not flesh and blood. Remember Ephesians 6? No, the enemy is the powers, rulers, forces of darkness, and spiritual wickedness in high places. That is what drove the Midianite army. The encampment of those powers, rulers, dark forces, and wickedness is in the atmosphere. It’s in the air! How can I say that? Because it’s the truth! The evidence is in the Bible.

“And you were dead in your trespasses and sins, in which you formerly walked according to the course of this world,  according to the prince of the power of the air, of the spirit that is now working in the sons of disobedience.”  Ephesians 2:1-2 (NASB95 emphasis is my own.) 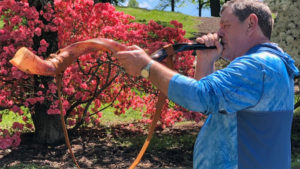 Now, the sound of the shofar is that which is like the Voice of God. When the Voice of God goes into the atmosphere it causes confusion and fear in the enemy’s camp. Satan is not Omniscient or all knowing. Only God is. Satan is not Omnipresent. He can’t be everywhere all the time. He has minions to do his bidding and they travel the atmosphere. Satan is certainly not all powerful. Only God is. You see, when that devil hears a shofar sounding, that which is like the Voice of God, he doesn’t know if it’s God speaking or if it’s Jesus returning. He doesn’t know if it’s a priest, blowing the shofar, a prophet, or The Old Watchman. Therein, confusion, chaos, blind panic ensues within the enemy’s camp and retreat is the only option left. That’s what happened in the camp of Midian.

The Bible says that 135,000 swordsmen fell to the sword. Yet Gideon and his three companies of 300 men, outnumbered 500 to 1, never suffered a loss. If they did, it’s not recorded. THAT’s how I want my battles orchestrated! That is spiritual warfare spilling over into the physical, natural realm. It is how worship changes a man from being afraid, doubtful, fearful, and hesitant into a mighty warrior of God to Judge a nation. It’s about how God uses the least man, of the least family, of the least tribe of a nation to do mighty things. It’s about how God, when the trumpets sounded, caused such chaos and confusion in the camp of the enemy that the enemy turned upon themselves with the sword and massacred their own. When you think about it, it’s kind of like when Jesus cast the demons into a herd of swine that dashed into the sea and perished! God did that! He did it then, He can do it now!

Like Gideon, many Christians are afraid and doubtful. They’ve put God in a box and left the Bible on the shelf too long. What God has done in the past, He’s still able to do in the present, and in the future. One of the great deceptions that the enemy uses within the ranks of God’s people is to convince them that God the Father, the Son, and Holy Spirit are powerless.

The shofar, and its use, were swept under the rug, neglected, and forgotten before the foundations of the ancient church were settled. Why? Because it’s considered a “Jewish practice”. I assure you that it is nothing of the kind. The shofar was established by God long before there were “Jews” in the Hebrew culture.

Always remember, the shofar was, and is, sounded at certain times of events that are cyclical. In other words, it sounds as events repeat themselves. I’ll get into that a little later in the 40 Days of Awakening. But, for the time being, understand that the sounding of the shofar marks and records these events on God’s timeline, not our timeline. Understand that the sounding of the shofar is a means of remembrance for each of these events. It is to remind us that what God has done in the past, He is still capable of doing in the present and the future. When we understand these little details, the beauty and scope of the work of Jesus on the cross and the coming of His kingdom can be understood in its entirety and the awe of how God works in His time, His seasons, cannot allow us to forget how powerful our God really is.

That’s all for today. Join me again tomorrow as we continue to travel through these 40 Days of Awakening! I am