Why Did Gideon’s Trumpets Cause Such Confusion? 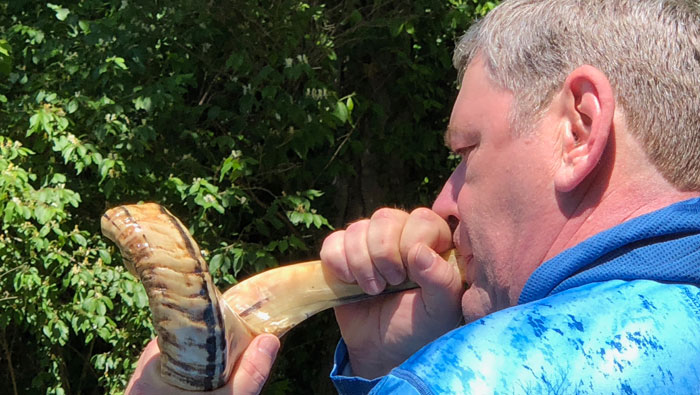 But how many of you know that Gideon’s army of 300 men were outfitted with only 300 swords, 300 torches, 300 pitchers (to conceal the torches, and 300 ram’s horn shofars? What is the significance of this?

Well, the camp of Midian was a camp of thousands, not hundreds. Gideon and his army were easily outnumbered many times over. The exact number within the camp is not told in Judges Chapter 6. However, later, in Chapter 8, it is noted that 120,000 swordsmen had fallen to the sword of Gideon and his 300. That’s not including the numbers the warriors of Ephraim, Naphtali, Asher, and Manasseh killed as they captured the leaders of Midian. Let’s just stick to Gideon and his 300 men for the moment.

“19. So Gideon and the hundred men who were with him came to the outskirts of the camp at the beginning of the middle watch, when they had just posted the watch; and they blew the trumpets and smashed the pitchers that were in their hands. 20. When the three companies blew the trumpets and broke the pitchers, they held the torches in their left hands and their trumpets in their right hands for blowing and cried, “A sword for the LORD and for Gideon!” 21. Each stood in his place around the camp/ and all the army ran, crying out as they fled.  22.  Whey they blew the 300 trumpets, the LORD set the sword of one against another even throughout the whole army; and the army fled as far as Beth-shittah toward Zererah, as far as the edge of Abel-meholah, by Tab-bath.” (NASB ’95 emphasis is my own)

Now, imagine, if you will, as we consider what is happening here. The watch has just changed. Those men getting off watch are tired and sleepy. Those men coming onto watch are fresh but I doubt they had experienced the best part of waking up with Folger’s in their cup. Then, imagine, hearing 300 ram’s horn trumpets sounding. Imagine seeing 300 torches instantly blaze up and come to life. Imagine hearing 300 voices crying out in unison, “A sword for the LORD and for Gideon!”

These are battle hardened warriors. They have tasted battle and have been tested. What could have caused so much chaos within the camp that they would turn upon each other with their own weapons? Hmmmm……perplexing? No, not so much.

“1. And you were dead in your trespasses and sins, 2. 2. In which you formerly walked according to the course of this world, according to the prince of the power of the air, of the spirit that is now working in the sons of disobedience.” (NASB ’95 emphasis is my own)

And, while we are in Ephesians, let’s include Chapter 6:12

The ‘prince of the power of the air’ in Eph. 2:2 is Satan. He is the spirit, lower case ‘s’, that works in the sons of disobedience. Satan is that which influences rulers (spirits i.e. demons) that manifest the powers, world forces, spiritual forces of wickedness in heavenly places. Where are the heavenly places? Heavenly places are in the air. Notice, Satan is the ‘prince of power in the air’. Why is this important?

Bear with me just a moment longer. It is obvious, at least to me, that Satan’s camp is in the air. That’s where he operates. That’s where his dominion is and where his emissaries operate. So, just imagine, when the shofar is sounded, that sound which is like the voice of God PENETRATES the ENEMY’S CAMP! I would think that would cause all kinds of grief and chaos as it did in the camp of Midian when Gideon and 300 men sent numbers of men to death at the hands of their own swords and causing the rest to flee without… ever… having… drawn… a… sword!

Satan is not omnipotent. He is a created being. He is a fallen angel. He desires to be El elyon the most high God. But he is not. When the trumpet is sounded, when that which is like the voice of God, it causes fear and chaos. Who is SOUNDING THAT TRUMPET? Is it a priest? Is it Lonnie Richardson? Is it Jesus Christ? Is it God? That, I imagine, would cause chaos and discord in the enemy’s camp!

Now was it the sounding of the trumpets that caused all that chaos and confusion? No. It was Gideon’s obedience to God’s battle plan. God had the plan all mapped out. If you will notice, even to which hand would hold the torches and which hand would hold the trumpets (Judges 7:20) In that obedience to God’s instructions, the miraculous was manifested in…well…biblical proportions.

Which brings me to my next point. When the shofar is sounded in obedience to God’s instructions in His Word or when prompted by the Holy Spirit, then big things start happening and, I might add, happen suddenly.

In seminary, I was taught that Gideon was a coward. He was super chicken. He needed a sign. He needed reassurance. Yes, I suppose that is true. But consider Judges Chapter 8 when he whipped the men of Succoth with thorns and tore down the tower of Penuel. How he dispatched Zebah and Zalmunna. Not acts of a cowardly man. Could it be that obedience brings assuredness, strength and justice as well? Hmmm….that may be a later topic for discussion.

But for now, when the shofar is sounded into the air, the sound that is like the voice of God penetrates the air causing chaos and confusion into the enemy’s camp. I believe that’s what happened. It was all about God and His plan for His people. It was about obedience of one man that followed God’s instruction, that was not afraid to carve out the path that would one day be an “ancient path”.

I am The Old Watchman; I hope that this has helped in some way. God Bless!